Susan Sarandon is on hot water for calling the Pope a Nazi. 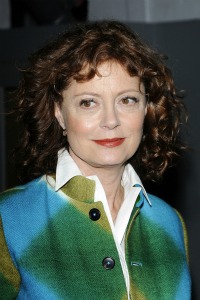 Actress Susan Sarandon is under fire for calling Pope Benedict XVI a “Nazi.”

Sarandon made the comments during a discussion about her 1995 film Dead Man Walking in which she played Sister Helen Prejean, a nun advocating against the death penalty.

Sarandon mentioned that she sent the Pope a copy of Prejean’s first book, then clarified, “The last one, not this Nazi one we have now.”

When she was chided by the presenter, she repeated the comment.

Catholics around the world are not amused. Bill Donohue, president of the Catholic League, said in a statement, “Susan Sarandon’s quip about Pope Benedict XVI being a ‘Nazi’ bespeaks unparalleled ignorance.”

“Joseph Ratzinger was conscripted into the Nazi Youth the way every other 14-year-old German boy was at the time. Unlike most others, he not only refused to go to the compulsory meetings — he actually deserted the Hitler Youth! Which is precisely why Jews today regard him as a friend, not as an enemy.”

“In short, what Sarandon said is positively obscene.”

Sarandon — herself born into a Roman Catholic family — is known for her candor, having received much attention over the years for her sometimes unpopular political and social statements. She has called for international entities to preside over U.S. elections, took an early stance against the war in Iraq and joined marchers at the Occupy Wall Street Protests.

Sarandon won the Oscar for Best Actress for her role in Dead Man Walking.