Edward Cullen might be immortal, but Robert Pattinson isn’t. However, Pattinson — along with his Twilight Saga: Breaking Dawn co-stars Kristen Stewart and Taylor Lautner — will be immortalized in cement outside Hollywood’s Chinese Theatre. 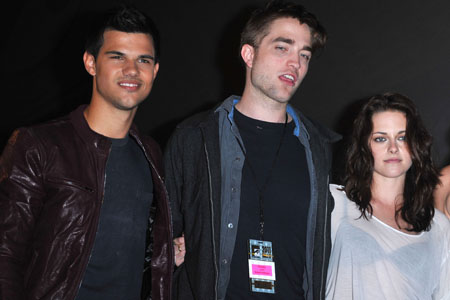 The Twilight trio is scheduled to stick their hands in cement during a ceremony on Nov. 3.

“The Chinese Theatre handprints and footprints ceremony is rich in tradition and provides the over four million people a year who visit the site an opportunity to experience the lore of Hollywood up close, for here lay the handprints and footprints of Hollywood’s most notable talents. Comedian Bob Hope even left an imprint of his legendary ski jump-shaped nose!” the theatre said in a statement.

The first film of the two-part The Twilight Saga: Breaking Dawn series is set for release on Nov. 18.

We’re wondering how it’s going to look. Who will get top billing? Stewart probably thinks she should, judging by her recent comments.

“There’s so many different versions of Bella in this, it’s insane,” Stewart said recently of her character in Breaking Dawn.

“It was a strange experience walking on set the first time I played a scene as a vampire because I’d watched everyone around me doing it all the time. I sound so lame, but vampire Bella really is my favorite character — she’s very representative of a matriarch, she’s very intuitive on almost a psychic level and no one ever acknowledges it, which is interesting.”

Or, maybe Stewart and Pattinson will have their handprints side-by-side since she finally confirmed their relationship status.

“So much of my life is so easily Googled. I mean, it’s like, come on guys, it’s so obvious!” the 21-year-old told British GQ.

Will they get their stars on the Hollywood Walk of Fame next?

32 mins ago
by Louisa Ballhaus