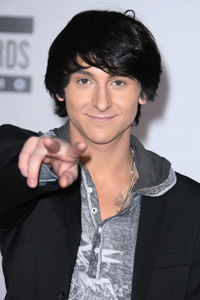 From Hannah Montana to handcuffs! Actor Mitchel Musso, who played Oliver Oken in the hit show starring Miley Cyrus, was arrested for driving under the influence yesterday in Burbank, California at 3:43 in the morning.

The star, who was busted in his 2007 black Mercedes Benz, is only 20 years old, which makes his offense even more serious.

“An officer was directing traffic and Musso failed to slow down when coming to the intersection,” said Burbank Police Sgt. Sean Kelley. “He didn’t obey instructions and was pulled over. A DUI investigation was held and he was given a field sobriety test. Musso is 20 years old so any alcohol in his system is illegal. He was well over the 0.08 limit.”

TMZ is reporting that officers detected a “strong odor of alcohol” when they approached his car. No word if he was alone or if he had a passenger in the car with him.

The actor was taken to jail and bail was set at $5,000 — however, he was eventually let go without having to make bail because he had no outstanding warrants. It also looks like he won’t make our Celebrity Mug Shot Hall of Fame, as police will not be releasing his photo.

Musso is the host of the Disney reality show, PrankStars, stars on Pair of Kings and voices the character of Jeremy Johnson on the animated show Phineas and Ferb. The actor was spotted last week hanging out backstage with Modern Family star Sarah Hyland as they teamed up to announce the 2011 American Music Awards nominees.

We have reached out to Musso’s publicist and have yet to receive a response.