Tone Loc (born Anthony Terrell Smith) has had a serious health scare. While performing at a recent concert, the rapper unexpectedly collapsed on stage. It was reportedly caused by extreme exhaustion, while some suspect a seizure. 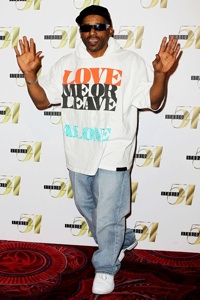 Veteran rapper and actor Tone Loc has a health scare to add to his recent troubles. Over the weekend, Loc collapsed on stage during a performance at an Atlanta concert. Much like fellow rapper Rick Ross, Tone Loc was rumored to have suffered a seizure, but his manager released a statement debunking the theory. His rep claims that the fall was due to “exhaustion” and nothing more.

In 2010, Tone Loc was pulled over in Los Angeles for driving erratically. Initially, the officer suspected he was under the influence, but it was revealed that he’d suffered from a seizure at the wheel.

This latest health scare couldn’t have come at a worse time for the rapper. He recently pleaded no contest to weapons and domestic violence charges stemming from an altercation with the mother of one of his children on June 18. According to The Hollywood Reporter, during the dispute, Loc was in possession of an unregistered Colt AR-15 assault weapon.

On the professional front, Tone Loc is best known for his hit singles Wild Thing and Funky Cold Medina, which dominated the airwaves in the late eighties and early nineties. He went on to use his popularity in music to start an acting career, including voiceover work. He’s appeared on countless television shows such as Living Single and Yes, Dear, and had supporting roles in films like Heat and Spy Hard.