George Clooney and his main squeeze Stacy Keibler step out together on the red carpet.

If you’re an Italian television host with a hot bod, a Pamela Anderson-nineties-inspired tattoo and have just been booted off Dancing With The Stars in its second week, man we wouldn’t want to be you — Elisabetta Canalis. 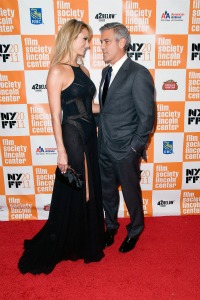 Especially after seeing pictures of your ex-boyfriend looking oh-so-hot parading his new girlfriend on the red carpet at the premiere of his latest film.

Hollywood actor George Clooney took girlfriend-of-the-moment Stacy Keibler along with him to the red carpet premiere of his latest film, The Descendants at the New York Film Festival.

Clooney is getting some pre-Oscar buzz for his work in the film, which is about a land baron who tries to reconnect with his two daughters after his wife suffers a boating accident.

Keibler, a former dance contestant herself, showed off her long stems and toned arms in a tight black number (complete with a high slit) that clearly sent out a message to anyone who might be interested: he’s all mine, ladies (for another few months at least).

This is only second time that the couple has publicly stepped out together since the Toronto Film Festival last month, in which Clooney and Keibler made head turns as only a few months earlier he broke up with his long-term Italian girlfriend, Canalis.

It was alleged that Clooney was none too happy about the Italian television host opening up to the media about their private relationship while they were together, as Canalis even suggested that she might one day marry the aging bachelor.

It seems that George is pretty happy with his new girlfriend Stacy — as long as she keeps quiet and away from the media when it comes to their relationship, that is.

As far as Elisabetta though — what could possibly be worse than looking at these pics of George and Stacy? That would be seeing Stacy accompany Clooney to the Oscars next year where he might win himself a best-actor statuette. Maybe this relationship won’t have such a fast expiration date…