Kelly Osbourne is bringing out the claws again with a rip about Christina Aguilera’s weight. 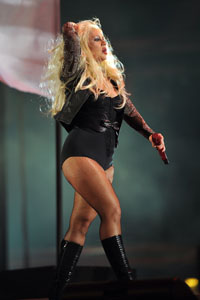 “She called me fat for years,” Osbourne said on this weekend’s E! Fashion Police. “I was never that fat.”

“I’m looking at this and thinking, ‘Well, she’s put on weight. This just isn’t flattering,'” George Kotsiopoulos said, adding that The Voice coach is “still probably a size 2/4.”

“But this is just a crappy outfit, regardless. No matter what shape your body is in, it’s just bad.”

Osbourne disagreed. “Trust me,” she said. “I’m a 2/4. That is not a 2/4.” The actress and television host has battled her weight for years, eventually reached 160 lbs. on her small frame. She lost 48 lbs. and still remembers the hurt she felt when people called her fat.

“Some horrible obnoxious teenager screamed out a car window to me, ‘You’re fat!’ I went to my parents bawling, ‘I would rather be called ugly than be called fat!'” Osbourne said of one of her hurtful fat memories.

Kelly Osbourne & Christina Aguilera: Where did it start?

The feud between the two blond stars started back at the 2003 MTV VMAs when Aguilera made a comment when Osbourne took the stage.

“Oh Lord, I didn’t realize it was still Halloween,” Aguilera reportedly said, according to the Daily Mail.

Aguilera isn’t the only one in Osbourne’s crosshairs. Former fiancé Luke Worall made disparaging comments about her during friend Amy Winehouse’s funeral. She let him have it, though.

“It was fine when my Kellyphant ass was paying 4everything wasn’t it? i just didn’t think u could get much lower but u did #wow.”