Beyonce’s video for Love on Top is missing one very important part of her body.

Beyonce first debuted her baby bump during her 2011 MTV VMA performance of Love on Top. Now, Bey has released the video for the song and it’s missing one important thing: her baby bump! 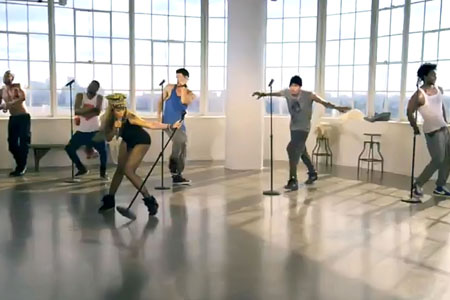 Are the rumors of a fake pregnancy true after all? Nah — Beyonce was spotted recently in New York City will her baby bump on full display. It’s likely the video was filmed before she started to show.

Now critics are comparing similarities in Beyonce’s latest video to one made by New Edition — both videos feature classic R&B-style choreography in a warehouse space. Does New Edition feel slighted by the comparisons?

“When I saw Beyonce on the MTV awards in the sequined jacket this year and with the dancers in R & B group positions, I knew then she was showing love to NE!” New Edition singer Michael Bivins told TheYBF.com. “The video teaser was part two … the classic video If It Isn’t Love reference.”

We’re impressed with Beyonce’s continued commitment to work, despite her growing belly. The singer recently revealed that she’s due in February — just a few short months away.

“My husband and I have been together for 10 years,” she told the Australian talk show Sunday Night. “All of my 20s. I feel like it is time … and I’m so happy.”

Take a break, Beyonce — you deserve it!

Watch the Love on Top video

What do you think about Beyonce’s Love on Top video: original or a copycat?