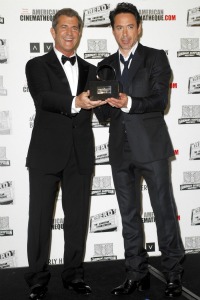 Enough is enough, says Robert Downey Jr. Downey — who experienced a rebirth in his career after years of drug abuse left him basically unhireable — says it is time to forgive Mel Gibson for his transgressions and let the performer/director get back to work.

Downey defended his friend while accepting the American Cinematheque Award.

“Unless you are without sin — and if you are, you are in the wrong [expletive] industry — you should forgive him and let him work,” said the Iron Man star.

“He taught my many things, and I will use the ‘C’ word — courage,” Downey said. “There’s nothing so much wrong with him. Of course you have to worry about the guy making the judgment here,” Downey joked about his own sordid past. “He’s a good dude with a good heart. ”

Downey and Gibson starred in Air America together — a part that Downey almost lost because the studio could not procure insurance for him due to his drug use. Gibson believed in Downey for the role so much so that he put up the money for Downey’s insurance himself.

“Mel and I have the same lawyer, same publicist, and same shrink. I couldn’t get hired and he cast me,” Downey said. “He said if I accepted responsibility — he called it hugging the cactus — long enough, my life would take meaning. And if he helped me, I would help the next guy. But it was not reasonable to expect the next guy would be him.”

Mel Gibson initially fell from grace after it was revealed he made racially insensitive and anti-Semitic remarks during his 2006 DUI arrest. He was taped making similar remarks by his ex-lover Oksana Grigorieva, whom he later admitted to battering by pleading no contest on domestic violence charges.