Nikki Reed has married Paul McDonald after a whirlwind romance. 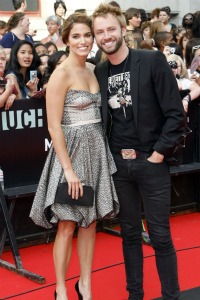 The Twilight wedding is here! No, not that one. After just six months of dating, Twilight actress Nikki Reed married former American Idol contestant Paul McDonald. That was quick!

The pair wed on Sunday in an intimate ceremony at a private Malibu ranch — probably not the same one where Shannen Doherty got married the night before. 100 close friends and family of the couple were in attendance, but no word on which of her vampiric costars were there, if any.

“We couldn’t be happier!” the 23-year-old Reed and 27-year-old McDonald told Us Magazine. “[We were] surrounded by our family and friends. We’re so glad this day has come!”

According to Reed, the couple had a total reversal of roles as far as wedding planning went: The groom planned everything.

“He’s doing a lot of it, he is. He’s, like, taking control,” Reed told MTV News. “He sits with his computer in between songs and is kind of on a roll with everything.”

The couple met at the premiere of the movie Red Riding Hood in March and later said it was love at first sight. The pair began dating almost immediately, and within a month he had moved into her Los Angeles home. Reed and McDonald got engaged in June after just three months together.

“It’s kind of one of those things you don’t expect. Like, last year I never would have thought I’d be getting married,” McDonald told MTV News. “She’s amazing. She’s the perfect girl. We fit each other; when you know, you know, and she’s the one.”