Zachary Quinto has come out as gay in a magazine interview and in his blog. 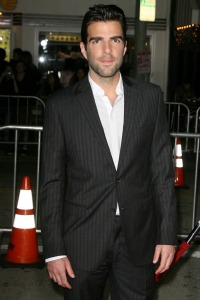 Zachary Quinto is best known as Spock in the 2009 flick Star Trek, but in all the press surrounding that movie and his hit show Heroes, he never discussed his sexuality. Now Quinto is breaking his silence in the hopes that gay kids won’t be ashamed of their feelings.

First Quinto just sort of dropped the fact that he is gay into an interview with New York magazine. Discussing his role in Angels in America on Broadway, Quinto said, “… as a gay man, it made me feel like there’s still so much work to be done, and there’s still so many things that need to be looked at and addressed.”

His quote was shocking because in the past Quinto has been noted for not feeding the rumor mill by answering questions about his personal life one way or the other. So what changed his mind? The death of gay teen Jamey Rodemeyer, a 14-year-old who committed suicide last month after being bullied over his sexuality.

Quinto wrote on his blog, “…in light of jamey’s death — it became clear to me in an instant that living a gay life without publicly acknowledging it — is simply not enough to make any significant contribution to the immense work that lies ahead on the road to complete equality. our society needs to recognize the unstoppable momentum toward unequivocal civil equality for every gay lesbian bisexual and transgendered citizen of this country.”

“i believe in the power of intention to change the landscape of our society — and it is my intention to live an authentic life of compassion and integrity and action,” he continued. “jamey rodemeyer’s life changed mine. and while his death only makes me wish that i had done this sooner — i am eternally grateful to him for being the catalyst for change within me.”

Quinto can currently be seen in What’s Your Number as one of the ex-boyfriends of Anna Faris.