Kellie Pickler guest stars on an all-new episode of 90210 this week and she’s got some competition in Annalynne McCord’s character, Naomi. 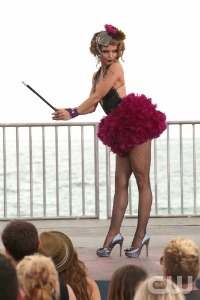 Will you give 90210 the “Benefit of the Doubt” this week? How about Kellie Pickler?

The gang is getting their party on again, only this time it’s for a good cause. This week’s new 90210 episode, “Benefit of the Doubt,” features guest star Kellie Pickler and a benefit to raise money for a new cancer treatment.

Beware, however — Naomi (Annalynne McCord) is ready to the steal the spotlight on “Benefit of the Doubt” and nothing ever goes as planned.

Netflix teams up with CW>>

The CW officially describes “Benefit of the Doubt” as the following: “Liam gets offered a modeling job after an agent sees the commercial for his bar, while Annie finds herself starting to fall for an unlikely guy. During a charity talent show event to raise money for an experimental cancer treatment for Raj (guest star Manish Dayal), Naomi is determined to win the contest in order to show up Austin’s (guest star Justin Deeley) out-of-town visitor Sally (guest star Kellie Pickler). While working on his music, Dixon pushes his limits and starts spiraling out of control, which forces Adrianna to confront him.”

Have you been keeping up with the antics on this season’s 90210? Head over to our comments section and sound off.