Dan makes a big decision on this week’s new episode of Gossip Girl. 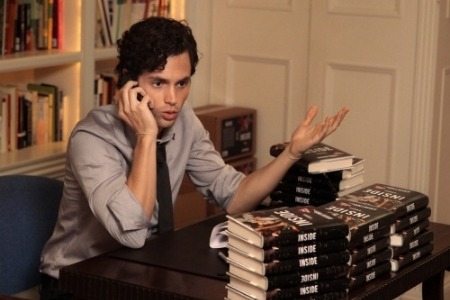 is it time for Dan to reveal all? We think it is. On this week’s new episode of Gossip Girl, “Memoirs of an Invisible Dan,” Dan (Penn Badgley) decides to bring Chuck and a few others together with the hopes of coming clean about his book and garnering their support.

Netflix teams up with CW>>

Meanwhile, Elizabeth Hurley is back as Diana and she’s got some leverage against Nate. Let’s just say she’s found some “incriminating” information about one of his friends.

Check out a preview of Gossip Girl’s all-new episode “Memoirs of an Invisible Dan” and don’t forget to watch the full episode tonight (Oct. 17).

The CW officially describes “Memoirs of an Invisible Dan” as the following: “After much deliberation, Dan decides to gather Serena, Blair, Nate, Chuck, Rufus and Lily to reveal the truth about his book in the hope that they will support him at his book party. Meanwhile, Blair and Louis (guest star Hugo Becker) hit a crises point after Louis reads Dan’s book. Diana (Elizabeth Hurley) learns incriminating information about one of Nate’s friends and uses it to her advantage.”

Have you been watching this season’s Gossip Girl? We want to hear from you!

What do you think of Elizabeth Hurley’s character? Are you enjoying it or is it over? Head over to our comments section and don’t forget to watch Gossip Girl’s new episode, “Memoirs of an Invisible Dan.”