When you think of Hugh Jackman, you think of claws: big metal claws, big sideburns, big pecs, lots of righteous fury. Now this is the kind of guy who could tackle purse-snatchers and outrun taxi-thieves and throw us over his shoulder and then place us indoors on a fainting couch while he goes out to save the world. That type of guy. Plus, he can also dance. What more can we ask for? So we’ll definitely be getting our ticket for the sci-fi robot flick Real Steel, in theaters now, if only to see Jackman clad in metal all over again. 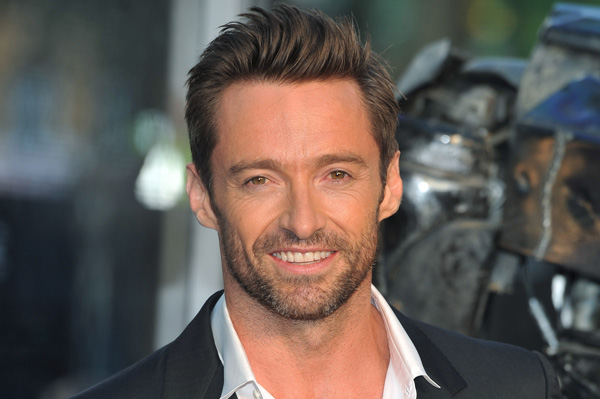 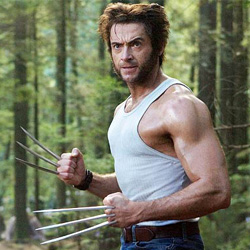 It can’t be easy making a comic book come to life on the big screen, but Jackman was obviously up to the challenge when he made his debut as Wolverine in 2000’s X-Men — and starred in four (!) X-Men movies after that. (Plus, he’ll get his own Wolverine movie in 2013: The Wolverine.)

Even Men’s Health was impressed with his physique. The magazine waxed poetic about Jackman’s prowess in 2006, when X Men: The Last Stand was released: “At 6’3”, Jackman’s an imposing presence, and he backs up that looming quality with muscle power: He benched 315 pounds and leg-pressed 1,000 prepping for X-Men: The Last Stand. (‘But I pretty much shat myself’ on the latter, he says with a belly laugh.) He perfected key tai chi forms and groin-shredding yoga positions for The Fountain. He does almost all his own stunts.”

Does he need a yoga partner now? Because this is one actor we want to Downward Dog with, if you get our drift.

The theater is his second home 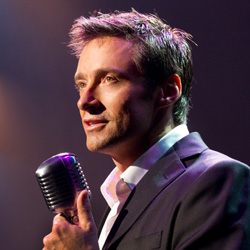 If you’ve ever wondered if there is a god, you haven’t seen Jackman shake his bon-bon on stage in The Boy from Oz, a script that called for sexy dance numbers and tight-fitting pants, which was pretty much enough to make us forget the entire plot when people asked us how we liked the show: Stage. Jackman. Butt. Good.

He’s also been in a London production of Oklahoma, in which he played Curly, made his NYC stage debut in Carousel in 2002 and has starred as Gaston in Beauty and the Beast (hot!) — and those are only a smidgen of the stages he’s graced.

Jackman said this about his role in Sunset Boulevard back in 1996: “It is like bungee jumping. It is. And that’s why I love it. I love the thrill of it. But sometimes it scares the hell out of you, and you just want to back off, take the ropes off, ‘Thank you very much, I’ll come back and do it tomorrow.'”

We love that he decided to jump! 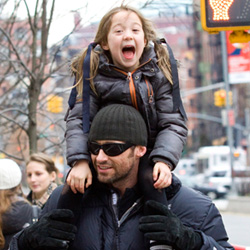 After Jackman and his wife found out they couldn’t have kids biologically, they decided to adopt two children. Now, the couple is active in such charities as the Worldwide Orphans Foundation and National Adoption Awareness Week.

“A while back, there was a lot of shame attached to it and parents wouldn’t tell their kids they were adopted,” he told Australia’s Herald-Sun. “What’s great is that the focus is now shifting to the care of the child. We were very fortunate and open — I can’t go into details because of the privacy of the birth parents, but I can tell you it was amicable. Adoption is a wonderful thing to do.”

Aw, he makes us feel all warm and fuzzy inside!

Hugh is a bit of an anomaly in Hollywood — in the best way possible. He has been married to Deborra Lee-Furness since 1996, and they have two children, Oscar, 11, and Ava, 6. “Fatherhood makes me happy,” He once told Australia’s New Idea magazine. ‘It has changed my life in the most brilliant way. Being a dad changes your perspective of life. The simplest things in life are completely satisfying.” He met his wife while they were filming the Australian TV show Corelli in the mid-’90s. Hooray for regular gals who score “Hughe” hotties!