Jason Segel’s Muppets make mirth and get a little naughty in new trailer. 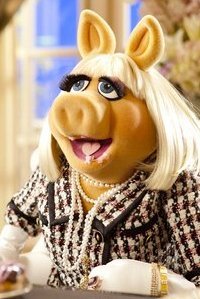 Hollywood, we have a problem.

The Muppets aren’t “famous anymore” says Rashida Jones to the furry gang in the new trailer for the Muppets’ return to the big screen, simply called The Muppets.

That may be overstating it, but we do need a plot, don’t we? For the record, the Muppets last theatrical release was Muppets from Space in 1999.

“Let’s just start at the bottom and work our way to the top,” says Kermit the Frog.

“Can’t you see I’m busy,” barks Miss Piggy as she’s chowing down on a couple of donuts.

Hey, a gal has her priorities.

Stars Jason Segel and Amy Adams are along for the ride as the Muppets travel the world to spread the word about a Muppets Telethon. Miss Piggy has a new dance partner, Pepe the Prawn, and there’s the debut of a new Muppet, the painfully shy Walter. The whole gang appears to be on board — Fozzie Bear, Gonzo the Great, Dr. Bunsen Honeydew, Beaker, Scooter, Statler and Waldorf.

Some eyebrows might be raised over Segel’s participation as he’s been mostly associated with risque R-rated fare to this point in his career. Segel is actually a co-writer of The Muppets and while the mirth is relatively tame, there is some potty humor — literally. The Muppets are asked to sit down on toilets in what appears to be a hardware store warehouse. Also, Fozzie proudly sports what he calls “fart-shoes” in another scene.

Finally, the Muppets chickens perform the Cee Lo Green song “F– You” in the trailer.

No wonder it’s rated PG. The Muppets is on screens Nov. 23.