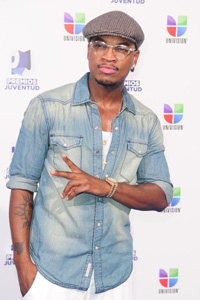 Singer Ne-Yo is a father for the second time! The 31-year-old singer, whose real name is Shaffer Chimere Smith, welcomed a boy on Monday with his girlfriend Monyetta Shaw.

The proud papa made the baby announcement on Twitter.

“Sal-u twit fam. If you are truly fam you’ll help me welcome the heir to my throne, born OCT.9TH at 6 pounds, 10 ounces! Mason Evan Smith!” he wrote.

Ne-Yo has been busy making music — and babies — the last couple years! His son Mason was born less than a year after his daughter Madilyn Grace, who will turn 12 months old in November.

“Feels like I’m in luv for the first time… welcoming that lil’ girl to the world last night defined for me what ‘willing to kill and die for’ truly means,” he tweeted after his daughter was born. “My world, my life, all hers.”

The “Miss Independent” singer is trying to teach his daughter how to be independent and self-confident. “She definitely knows her worth — which is a beautiful thing,” he told People. “That’s something I’ve tried to instill in her from day one: understand that you are a Godsend. You’re an absolute angel and people are supposed to treat you that way. She’s extremely diva even at 10 months.” (Care to babysit, anyone?)

In fact, he said she has already developed one diva trait. “She’ll only let you hold her hand a certain way,” he said.

“[Fatherhood] has been a ride, but I’m loving every minute of it,” he gushed.

Ne-Yo is working on his next album, The Cracks in Mr. Perfect, which is set to drop next year.