Dallas star Larry Hagman has been diagnosed with cancer. 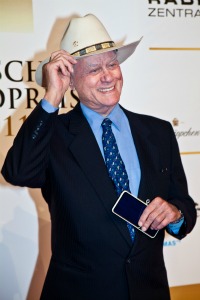 J.R. Ewing dealt with a lot of baddies in his day — including himself — but now actor Larry Hagman is in for the fight of his life. The Dallas star has been diagnosed with an unnamed form of cancer.

Hagman released a statement, but did not disclose what type of cancer he has.

“As J.R. I could get away with anything — bribery, blackmail and adultery. But I got caught by cancer,” Hagman said. “I do want everyone to know that it is a very common and treatable form of cancer.”

“I will be receiving treatment while working on the new Dallas series,” his statement continued. “I could not think of a better place to be than working on a show I love, with people I love. Besides, as we all know, you can’t keep J.R. down!”

Hagman is starring in a revitalization of the ’80s hit nighttime soap, which is due to start production on Monday. In a statement of full support, TNT wrote:

“Everyone at Warner Horizon Television, TNT and the entire Dallas family completely supports Larry Hagman during this time,” the statement reads. “We look forward to watching Larry once again work his magic by bringing one of television’s most interesting, complex and controversial characters back to the screen.”

Original Dallas cast members Patrick Duffy and Linda Gray will join Hagman in the Dallas reboot as Bobby and Sue Ellen Ewing. The cast is rounded out by Josh Henderson of 90210, Jesse Metcalfe of Desperate Housewives, Jordana Brewster of Chuck, Julie Gonzalo of Eli Stone and Brenda Strong, also of Desperate Housewives.