Music mogul Russell Simmons stands with — and offers to clean up after — Occupy Wall Street protesters. 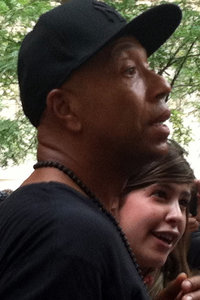 When you need a quick clean up, who’s your man? It’s Russell Simmons.

The hip-hop mogul offered to clean up New York City’s Zuccotti Park, home of the Occupy Wall Street movement, on the eve of the city threatening to clean up the park and thus evicting the protestors.

“I will pay for clean-up of Zuccotti Park to avoid confrontation,” tweeted Simmons around midnight. “I don’t wanna go to jail but I will be there ready!”

“At zuccotti park,” tweeted Simmons this morning. “Am glad that city is not evicting the protesters the morning. The movement continues.”

The owners of Zuccotti Park made the decision to delay the park’s clean up, which meant that the “protesters who have been living at the site for nearly a month will not be forced to depart and remove the tarps, beds and other items accumulated during the ongoing demonstration,” said a New York City deputy mayor, according to the Wall Street Journal.

Simmons, the former hubby of Kimora Lee, said he had been to the park at least 15 times since the protests began. He paid a high-profile visit on Monday with Kanye West and the Rev. Al Sharpton.

According to reports, Simmons has built up a $340 million empire based on music, fashion and recently, financial services. His company, UniRush Financial, sells prepaid debit cards to low and middle-income customers.

Despite his wealth, Simmons has been largely embraced by the Occupy movement, which has called for restrictions on the influence of big business in politics.