Courtney Stodden is back on Facebook just a day after she was bounced from the social networking site.

Just kidding! Teen bride Courtney Stodden isn’t banned from Facebook for being too sexy — the social network gave her back her page and apologized to her. 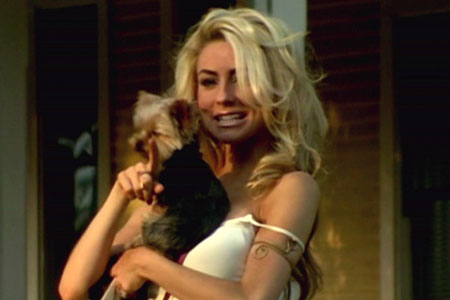 “This page was removed in error and has been restored. We apologize for any inconvenience this has caused,” Facebook reps wrote in a statement.

Stodden is relieved about the reversal, comparing her experience to cyber-bullying.

“I am so happy that I’ve brought attention to the problem that I have had for so many other people. I was cyber-bullied, and I hope this doesn’t happen to other people,” she told RadarOnline Friday.

“It’s the jealousy from the women towards her,” Krista Keller told E! “The men love her, the women hate her. The women report the photo because it’s so easy to do. You just click a button. They think she’s too sexy, they all report her together, and it’s done.”

Keller said her daughter is nothing but an innocent teen.

“There is nothing on her page you wouldn’t find anywhere on Facebook!” the mother added. “She has never done any nudity. Not a breast, not even a butt cheek. It’s just her in a bathing suit!”

Stodden might not be nude, but her tweets border between Godly and un-Godly creepy.

“Wrapping myself up inside of this lovely late night as my delicate loved ones joyously join me in sweet conjunction; Family is Bliss! ;-x” she wrote earlier this week.

Let’s take one guess what she’s talking about here. Hint: it likely has to do with her 51-year-old husband, Doug Hutchison.