Are Ashton Kutcher and Demi Moore splitting? Maybe, if a moving van spotted outside their house is any indication. 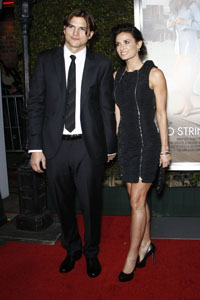 Ashton Kutcher and Demi Moore haven’t publicly talked about a split, but a moving van spotted outside the couple’s Santa Monica home has people speculating about the status of their relationship.

Several media outlets posted a photo of the moving van — shown here — allegedly taken outside of the couple’s home. No word if anything was being moved in or out of their home.

Meanwhile, Kutcher’s alleged one-night-stand, Sara Leal, is revealing several salacious details about their night together. The pretty blond told US Weekly that she had sex with Kutcher two times without a condom and that he said he was “separated” from Moore.

“I’m a normal 22-year-old girl, and I spent the night with someone who I thought was separated,” Leal told the magazine. “If I had known he was happily married, none of this would have ever happened.”

Friends are reportedly worried about Moore, saying she’s not eating right. “It’s taking a toll,” a source told US Weekly.

“She is superskinny, and it’s hard to look at,” added another source. However, Moore told ELLE magazine that she’s given up on having a perfect body.

“I had an extreme obsession with my body. I made it a measure of my own value. I tried to dominate it, which I did and I changed it multiple times over,” she said in the magazine’s May issue.

“[Dieting] didn’t bring me anything but temporary happiness. Does being thin resolve anything? No… At the end of the day, this kind of obsession is pointless and meaningless.”

Kutcher remains quiet throughout all of the scandal, only tweeting links to his various online investments and random thoughts.

“When ET wanted to ‘phone home’ do you think he anticipated that they would answer on a cell phone?” he tweeted Thursday.

Perhaps he wishes he could “phone home” to another planet right now?

Do you think Ashton Kutcher and Demi Moore are on the brink of a break-up?

Read on for more Ashton Kutcher and Demi Moore