At the release of her new fragrance Wonderstruck at Macy’s in New York City, country cutie Taylor Swift revealed who she wants to hook up with next — on a record album that is! 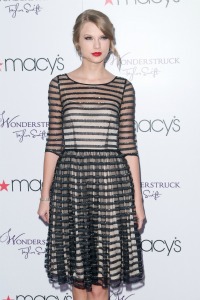 Taylor Swift has dueted with some of the most fabulous singers and bands in the business. But there is one person she has yet to croon a tune with — and singing with performer is her latest heart’s desire. Hint, he’d catch a Grenade for her!

Swift revealed during a press conference for her new fragrance Wonderstruck at Macy’s, “I’d love to sing with Bruno Mars because he has an incredible voice,” she revealed to E!Online.

Taylor Swift is Billboard’s youngest Woman of the Year>>

Swift has already lent her pipes to duets with John Mayer, Boys Like Girls, Jason Mraz, Def Leppard, Justin Bieber, Stevie Nicks, Kellie Pickler and more, so it’s a sure bet that whatever she wants to happen, will indeed happen.

At her fragrance launch in New York City, Swift said of her many duets, “Just having all of these amazing artists come up on stage and sing with me makes me wonderstruck.”

This past July, Swift appeared on the Elvis Duran and the Morning Show on New York radio station Z100 and talked about her desire to work with Mars even then.

She stated, “[At the MET ball], I got into a daze because there’s so much stuff to look at. I’m turning around the room and all of a sudden there’s Bruno Mars right behind me! We’re in this line going through the exhibits. I said, ‘I would love to write with you sometime.’ He said, ‘Let’s do it. Let’s meet up on the road.'”

Since the two love to write songs about love — and Taylor is famous for writing about her exes — a collaboration between the two might be the most fabulous love song of all time!