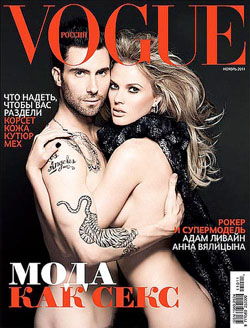 Maroon 5 lead singer Adam Levine appears on the cover of next month’s Russian Vogue, along with his stunning girlfriend, model Anne Vyalitsyna. The duo is naked — Levine likes to take off his clothes for magazines.

“I spend most of my life naked,” Levine told Cosmopolitan UK earlier this year. “In fact, I often have to be told by the people around me that it’s inappropriate to be as naked as I am. But I live in California, where it’s always warm, so why not?”

Levine and the Victoria’s Secret Angel met in 2010 when Maroon 5 performed at the Sports Illustrated Swimsuit Edition release party. She’s appeared in several videos for the band since then, including “Misery” and “Never Gonna Leave This Bed”.

Perhaps his very public nakedness with his lady friend will silence the questions over his sexuality for good.

“There’s no way to hide my straightness,” he said earlier this year. “But if people didn’t think there was a small chance I was gay, then I wouldn’t be doing my job very well. Look at the best ones, guys whose sexuality was always questioned. Bowie. Jagger. Freddie Mercury. I wouldn’t be the front man of a band if that question hadn’t come up at some point.”

Maybe that’s where he got the inspiration for Moves Like Jagger?

Next up for Levine? Maroon 5 and Kanye West will perform at the Victoria’s Secret fashion show on Nov. 9.

Maroon 5 singer Adam Levine slams VMAs
Adam Levine to OUT: My brother is gay, we knew when he was two
Adam Levine turning NBC into karaoke central