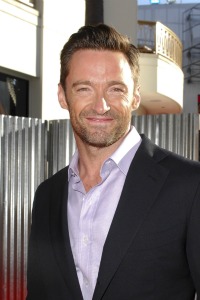 Hugh Jackman can tick one more thing off his bucket list: He met Queen Elizabeth.

The Aussie was invited to Buckingham Palace for a glittering reception honoring top Australians in honor of the Queen’s jaunt down under. She is scheduled to visit the Commonwealth realm next week.

So what did the pair chat about?

“She was talking about the flight, about traveling. I wanted to ask her if she was stopping off, but I didn’t think I was meant to ask questions,” he told reporters, revealing a rule of royal etiquette: The Queen asks all the questions, thank you very much.

The Real Steel star also revealed that he was not quite comfortable all night.

“As an Aussie it feels weird — I’m just waiting to get thrown out,” he joked.

It was a lovely way for Jackman to celebrate his birthday — the actor turned 43 this week.

Also in attendance was director Tom Hooper who made that little movie about the Queen’s dad, The King’s Speech, which won four Academy Awards.

“You just meet her very quickly, and I don’t really know if she knew who I was,” Hooper told reporters.

Doubtful. We hear the Queen is still sharp as a tack at 85 and does her due diligence on each and every guest at her parties.