Teresa Giudice isn’t just causing feuds in her own family — Caroline Manzo and Dina Manzo aren’t speaking, thanks to her!

Real Housewives of New Jersey star Caroline Manzo is allegedly not speaking to her sister — and trouble-making co-star Teresa Giudice is reportedly to blame! 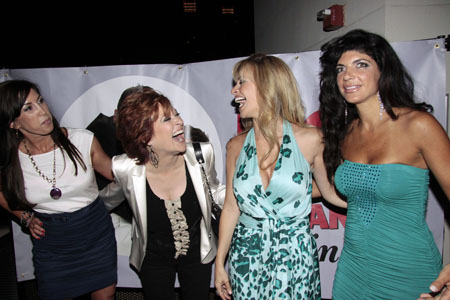 “Teresa is a wolf in sheep’s clothing,” Manzo told US Weekly.

Giudice has done little to endear herself to her co-stars this season — she made fun of Manzo in her Fabulicious! cookbook, referring to the 50-year-old mother as “Italian as the Olive Garden.” She also spread the rumor that her sister-in-law, Melissa Gorga, was once a stripper. Gorga and her former boss have denied the claim.

“It was all a charade,” Manzo continued. “And we were all pawns in her horrible game.”

And now it’s rumored to be causing a riff in the relationship between Caroline and her sister, Dina Manzo.

“Eww getting some MEAN tweets,” former RHONJ star Dina tweeted. “I didn’t take sides, don’t assume~didn’t even know they were not getting along until recently~I’m not involved.”

Manzo also talked about her problems with Giudice in an interview with Gayle King.

“We were never really friends,” Manzo told King. “She was an acquaintance. She was very good friends with my sister, Jacqueline [Laurita]. … I think Jacqueline suffered the biggest blow here.”

Laurita hasn’t been shy about her recent feelings for Giudice — she even referred to her co-star as “scum” on Twitter.

It looks like we’ll find out a lot of their dirty laundry this Sunday on part one of the Real Housewives of New Jersey reunion.

“We all make mistakes and can be cruel and heartless in the things we say and do, but [Teresa’s behavior] is different — premeditated,” Manzo said. “To sit there and try to hurt someone…assault their character, it’s unacceptable. I’m done.”

Do you think Teresa Giudice is to blame for the feud between Caroline Manzo and Dina Manzo?

Read on for more Real Housewives of New Jersey