Kristen Stewart isn’t afraid to call ‘vampire Bella’ her favorite of all the Twilight characters, but how does her Breaking Dawn role compare to her Snow White and the Huntsman work? 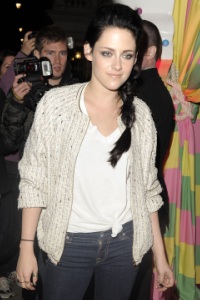 Kristen Stewart’s been playing Twilight‘s Bella Swan for years now, but up until the sequel Breaking Dawn started shooting, her character had remained fairly consistent. These days Bella Swan is rocking everything from blushing bride to mother-to-be to newly dead vampire!

Kristen Stewart spoke to Box Office magazine recently about the new facets of Bella Swan. “You shoot, obviously, out of order and you keep going back and forth between pregnant, human and dead vampire Bella,” she shared of her experiences filming. “There’s so many different versions of Bella in this, it’s insane.”

The 21-year-old continued, “It was a strange experience walking on set the first time I played a scene as a vampire because I’d watched everyone around me doing it all the time. I sound so lame, but vampire Bella really is my favorite character — she’s very representative of a matriarch, she’s very intuitive on almost a psychic level and no one ever acknowledges it, which is interesting.”

Kristen Stewart also spoke to the magazine about her lead role as the kick-butt Snow White in Snow White and the Huntsman, due out June 1, 2012. Speaking of her character, Stewart shared, “She is sort of the last shred of hope for her land. She has this ethereal, spiritual connection to her people — she really feels things — and so it’s like we don’t really feel empathy.”

Kristen Stewart, who has finally copped to a real-life romance with Robert Pattinson — the actor playing her vampire love-interest in Twilight — continued, “I’ve had some [expletive] eye-opening experiences on this movie. I think that to truly care for something isn’t just putting yourself in that situation aesthetically and then going, ‘Oh my god, I feel so bad for them.’ It’s truly not thinking of yourself at all.”

“The way that you fight is that you must take out anything that hurt your people,” said Stewart. “Basically, I’m fighting evil — I’m fighting the most evil mother [expletive] and it’s fine that they’re being killed. It’s anguish. It’s literally [expletive] anguish. She takes absolutely no pleasure in ever hurting anything.”

Are your more excited to see Kristen Stewart as vampire Bella Swan or Snow White?