Chris Tucker is laughing at his huge debt in his comedy act. 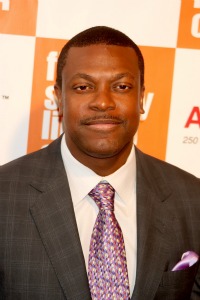 When you owe $11.5 million to the IRS you can either cry or you can laugh. One comedian is choosing to laugh, and hopes that we all laugh with him.

Chris Tucker is on the verge of foreclosure, but the funny guy is not letting “The Man” keep him down. Despite the bank wanting to take his house back and his reported $11.5 million IRS debt, Tucker is fine with making fun of himself — for a profit, of course.

At a stand-up show in Miami — before the news broke of his foreclosure woes — Tucker joked, “That’s the last time I let Wesley Snipes help me out with my taxes!”

He even mocked bill collectors, saying, “They calling you acting like you owe them the money personally! ‘We need the money,'” he mocked. “I don’t owe you [expletive]! This is between me and the company!”

As long as Tucker follows his own advice to not use Wesley Snipes‘ legal team and pays off the debt, he should be fine. He made bank for his Rush Hour films and is rumored to be in the cast of The Silver Linings Playbook with Bradley Cooper and Robert DeNiro. While he might lose this house — he owes over $4 million on it, but it’s only worth about $1.4 million — he does have several other homes.

He’ll still be able to fly first class, which he also joked about.

“You get in first, and they set you up with some champagne and shrimp, and you’re all comfy and stuff, and what do they do? They let the coach people in and make you feel all guilty,” he said.