John McClane is back for another round of Die Hard action. Bruce Willis will reprise his role as the famous cop for the fifth entry in the series. A release date has been set, and it’s on the most romantic day of the year — Valentine’s Day!

Yippee Ki-yay boys and girls! Die Hard 5 finally has a release date and an official title. The film will be called A Good Day to Die Hard and it’s scheduled to hit theaters on Feb. 14, 2013. 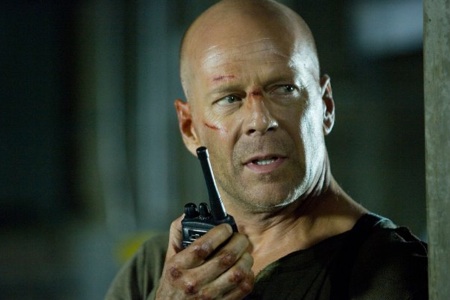 The action franchise that turned Bruce Willis into a movie superstar has four successful entries that have earned a total of $530 million worldwide. A Good Day to Die Hard will be the first in the series to debut during the winter.

According to The Wrap, Bruce Willis will return as the resilient John McClane, who’ll be faced with a dangerous Russian threat. The famous hero has taken on his fair share of terrorists and mercenaries, played by amazing actors such as Alan Rickman, William Sadler, Jeremy Irons and Timothy Olyphant. We can only imagine what villain they have in mind for this outing.

On a side note, 20th Century Fox is interested in making the new Die Hard a family affair. The studio is looking to cast a young actor in the role of Willis’ son, John McClane Jr. So far, rumors have been swirling that 3:10 to Yuma’s Ben Foster, Breaking Bad’s Aaron Paul and even professional football player Tim Tebow have been shortlisted for the role.