Jersey Shore took us to places that were darker and scarier than anyone could have imagined last night, like Deena’s mind and Mike’s temper. The housemates wrap up their trek into Italy as a house divided. How will that bode when they return to Jersey? 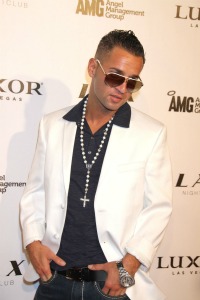 The newest episode of Jersey Shore started off with Snooki telling Jionni everything that really went on with Vinny the night she was drunk and ended up in his bed. He told her, “I cannot call you my girlfriend right now.” Snooki, in a state of denial, told Vinny that they were working things out.

Most of the episode revolved around Deena trying to “make sex” with Pauly, who wanted no part of the situation. She has had a crush on him since she arrived at the house, and has desperately tried to get into his bed. But because they are such good friends, he doesn’t want to ruin their relationship. Deena keeps reminding him that Snooki and Vinny hooked up and that they’re still friends.

A desperate Pauly didn’t know what to do, and luckily, a drunk Deena passed out before anything could happen between them.

Meanwhile, yet another slang term was revealed tonight, “guido problems.”

Guido problems are issues that only guidos have, like running out of spray tanner, not being able to go to the gym and burning your kooka in the Jacuzzi. Things normal people wouldn’t be affected by.

After a night at a local club where everyone wanted to let off some steam before returning to the states, they were encountered by a mob of angry Italians who kept chanting, “shame” at them (which is correlated to the stories that came out of Italy that the natives of Florence wanted nothing to do with the cast.) Mike tried to be a tough guy and fight it out, but everyone else maintained cool heads and left the club.

Deena and Snooki were determined to continue the party, so they headed to another club where they were surrounded by a bunch of guys who got too close to them. Angry, they went to the bar, where the bartender started to throw ice cubes at them. Furious, Snooki and Deena began to break the bottles on the bar.

But the biggest issue of the evening was how much everyone was fed up with Mike. No one wants him around, because he brings too much drama into the house. No one wants to room with him when they go back to Jersey and Mike dropped a bombshell that he’s, “probably not going to Jersey.” Vinny kept telling Mike and everyone else in the house about his attitude by saying, “change or leave.”