Lindsay Lohan is facing a serious threat of jail time after she fails to meet two probation requirements in the same month. 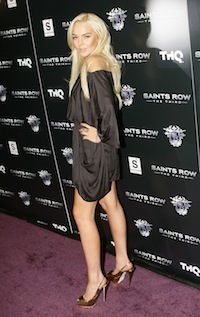 Lindsay Lohan gives us deja vu with yet another probation violation that could land her in jail next week. Only this time, she has multiple infractions to answer for when she attends court on October 19th for her progress report in front of the judge.

The current terms of Lindsay Lohan’s probation set in May 2011 include:

1.) Performing 360 hours of community service at the Downtown Women’s Center

2.) Seeing a court-appointed psychologist at least once a week

We learned that Lohan was kicked-out of the Downtown Women’s Center a few weeks ago for multiple infractions, including failing to commit to her four-hour shifts. To make matters worse, since May she has only completed 21 hours of service — that’s about five hours a month from June 2011 to September 2011. Not exactly compelling evidence to demonstrate commitment.

TMZ now reports that Lohan has also skipped out on her mental health visits too. It’s not clear how Lohan is going to talk — or lawyer — her way out of this one. Judge Stephanie Sautner has been very clear Lindsay must abide by the terms of her probation to avoid jail time. Previous excuses for violations, like working, are not going to be accepted according to TMZ. Lindsay isn’t on good terms with Judge Saunter either after her summer rooftop parties irritated the court.

All of this legal drama and Lohan’s troubles date all the way back 2007 when she first entered rehab at Wonderland. Since then, she has completed two more rehab stays within the same year and has faced convictions on two DUIs and felony possession of cocaine.