Former American Idol Fantasia Barrino reveals the sex of her baby and her pregnancy struggles. 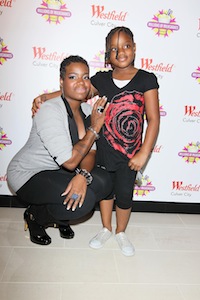 Fantasia Barrino is having a baby boy and is due December 29th, the mom-to-be confirmed during a phone interview on The Wendy Williams Show. Barrino got very emotional over the recent unfavorable media attention she has received.

Most notably, Wendy asks Fantasia if the rumors that her pregnancy cost her an upcoming role, portraying the late Gospel legend Mahalia Jackson, are true. The story goes that producers fired Barrino for concealing her pregnancy and that the Jackson family was very unhappy with her because the American Idol winner isn’t married.

Fantasia goes on to explain how producers for the biopic contacted her in January to let her know the project was on hold due to financing issues.

It’s been a very tumultuous few years for Barrino, especially with her recent suicide attempt in August 2010. In the months preceding her near-fatal overdose, the press had been speculating that she was having an affair with a married man named Antwaun Cook and made a sex tape with him. Fantasia denied the sex tape allegations.

In late 2010, Fantasia testified in court about her relationship with Cook and revealed that she’d had an abortion shortly before her suicide attempt. Barrino also stated that she believed Cook was separated during their 11-month relationship.

Antwaun Cook is rumored to be the father of Fantasia’s baby — however neither party has released a statement to confirm or deny such reports. When Wendy Williams asked Barrino about paternity, Fantasia curtly replied, “I am not going to talk about that.”

Her pregnancy has placed her on bed rest — which has us wondering if the recent rumor mill and stress surrounding the Mahalia Jackson biopic production are wearing the former American Idol down.

We wish the best for Fantasia and her baby.