Ticking time clocks and ghostly messages — The Vampire Diaries shifted to a whole new kind of game this week.

When the Klaus (Joseph Morgan) train rolled up to Mystic Falls last week, we knew something wild was going to happen this week on The Vampire Diaries — and we were not disappointed. Elena’s blood, other worlds and Originals, oh my! 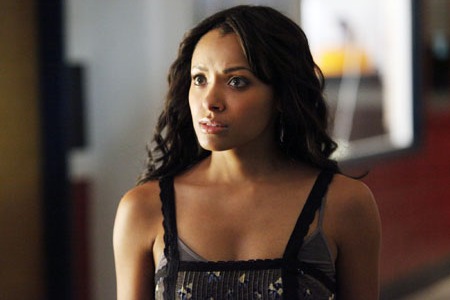 The race to drain Elena’s blood (Nina Dobrev) was ridiculously insane — in a TVD-kind-of-way — wasn’t it? If you missed any of this week’s episode, don’t worry, we’ve got everything you need to know about “The Reckoning.”

But be warned — it’s a game changer…

It was prank night at Mystic Falls High, but grumpy Klaus crashed the party.

First, he cornered Elena and dragged her to the gym, getting rid of the non-supernatural students.

When he finally came face-to-face with Bonnie, he used the one thing that he knew would get her to fix his hybrid problem — Tyler (Michael Trevino).

Tyler was forced to drink Klaus’ blood, which in return forced Bonnie to try and come up with a way to fix the hybrid problem — or Tyler would die. But in reality, he also faced becoming a hybrid.

Then it was time to add Stefan (Paul Wesley) into the mix. Klaus compelled Elena’s flame to pledge his alliance, which was even more of a dangerous move. Stefan killed Dana right in front of Elena. 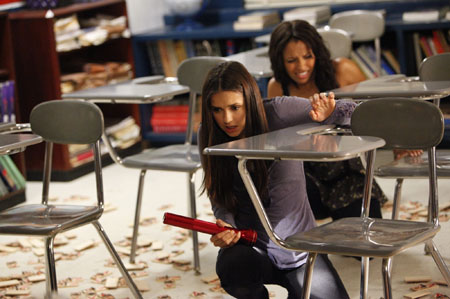 We thought things were getting intense in the gym, but that was just the beginning. Bonnie remembered she couldn’t contact the dead anymore — but Jeremy (Steven R. McQueen) could.

Too bad he was in the trunk of Damon (Ian Somerhalder) and Katherine’s car and they were trying to use him to contact Anna!

No worries, Matt had a backup plan. Ghost Vicki kept trying to get a hold of him by kicking his shoes around and sending creepy texts to his phone, so what was his plan? To be on death’s door and come back to life via CPR from Bonnie so he could try and contact Vicki for help with neutralizing Klaus.

If that wasn’t bad enough, Rebekah found out Elena had the necklace — but Katherine (also Nina Dobrev) took it. This totally pissed Klaus off, so he put 20 minutes on the clock — if Bonnie (Kat Graham) didn’t find a solution, Stefan had to feed on Elena…

That was just the beginning.

tvd: The clock ticks down

With the clock ticking down, Elena tried to get Stefan to fight feeding on her but he couldn’t hold out and she took off like a track star with Stefan right behind her. Of course, Klaus caught her and Stefan was compelled to turn off his emotions — see, game changer — and he lunged right at Elena!

Meanwhile, Matt delivered his message from Vicki to Bonnie. The witch who created the curse made it very clear that it’s because Elena’s still alive, but Klaus thought it was a trick — that they shouldn’t kill her. Turns out she doesn’t have to die, Klaus just needs her blood. 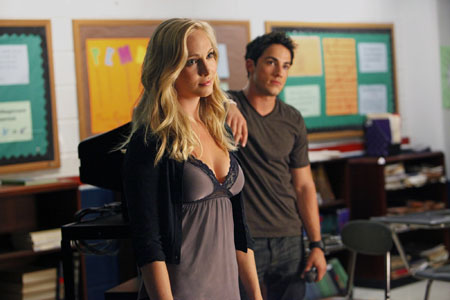 He made Tyler drink some Doppelganger blood and the boy went into some massive transitioning — not the kind that Ray went through. So, now Tyler is a hybrid and he doesn’t seem phased by it.

Elena woke up in the hospital to the knowledge that her blood was being taken by Klaus — but have no fear, Damon was there.

We were wondering when Damon would show up with some nice leverage — Michael. He dropped some knowledge on Klaus that he and Katherine know about Michael, the hunter who is, well, hunting Klaus and has been for a very long time.

Opting out of being compelled by Damon to forget, Elena decided she wanted to remember everything. Damon returned her necklace and vowed never to leave her again — aka, not to go on road trips with Katherine anymore.

Ready for a surprise? Klaus left because of Damon’s leverage of Michael, but he put Stefan on the task of watching over Elena and Damon until he returns!

Oh, and Katherine and Jeremy unearthed Michael the hunter and Matt can see dead people — at least Vicki!

So what happens now that Michael has been woken up? We said it from the beginning — “The Reckoning” was a game changer.

What did you think of this week’s episode of The Vampire Diaries?