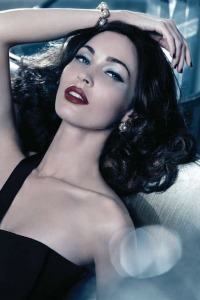 She was most recently the body that slithered itself into Emporio Armani underwear and Armani jeans. But now Megan Fox has glammed it up a notch as the face of the Armani Christmas cosmetics campaign.

Paying homage to the ladies she most admires, Fox is striking in makeup taken from the designers 30s-inspired Madre Perla line.

She revealed in the ad, “I never thought I would be working with an icon like Mr. Armani. He has an amazing energy and I am flattered and humbled to be a part of it.”

Megan was recently replaced by Rihanna for the Armani clothing campaigns, but for the holiday makeup campaign there was no other choice than the 24-year-old knockout, married to actor Brian Austin Green.

Fox could easily be a young Elizabeth Taylor in the photos, which show off a more softer and seductive side than the young actress usually plays.

As of late, in order to be taken as more of a serious actress, Fox is in the process of having her Marilyn Monroe tattoo removed from her forearm, a homage to the actress and her first tattoo. When she was still starting out in Hollywood she stated, “She was one of the first people I saw on television, like literally moments after I was born. Every time I heard her voice growing up I would always cry. I’ve just always empathized with her.”

Since then, Fox has decided she no longer wants the Monroe reference on her arm. “I’m removing it,” she stated in a magazine interview. “She was a negative person. She was disturbed, bipolar. I do not want to attract that kind of negative energy in my life.”

Off the page, Fox will soon be seen in the new Judd Apatow movie This is 40, with Chris O’Dowd and Jason Segal.