A change to the royal line of succession is in the works that could make a future daughter of Prince William and Kate Middleton the Queen. 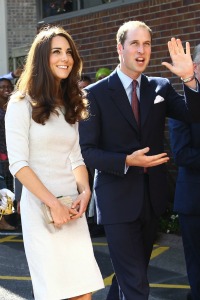 If proposed changes to the British royal line of succession are approved, a future daughter of Prince William and Kate Middleton could become Queen — even if she has a younger brother.

By historical tradition the oldest son of the royal couple would be next in line for the throne at birth after William, even if he is not their oldest child. Now Prime Minster David Cameron wants to change that — with Will and Kate’s blessing, of course.

“We espouse gender equality in all other aspects of life, and it is an anomaly that in the rules relating to the highest public officer we continue to enshrine male superiority,” Cameron wrote in a letter to the governments of British commonwealths and Queen Elizabeth, all of whom who have to ratify the change.

In addition, Cameron has proposed lifting the ban on royals marrying Catholics — the now Duchess of Cambridge converted to the Anglican Church before the royal wedding — and is reportedly requesting that only the first six in line for the throne need receive permission from the reigning monarch to wed, instead of everyone in line, as it currently stands.

Opponents of Cameron suggest that the only reason he wishes to enact these changes is in an attempt to woo female voters at election time.

What will Prince William and Kate Middleton name their kids? >>>

Queen Elizabeth II took the throne upon the death of her father King George VI because she had no brothers. Her Royal Majesty — and the Palace — has remained mum on the situation, but said several years ago when a similar plan was put forth by then-PM Gordon Brown that it would have to be approved by all the commonwealths before the Queen would even begin to consider it.