Harry Potter bad boy Jamie Waylett is facing some serious jail time after he was caught with a bomb during the London riots. 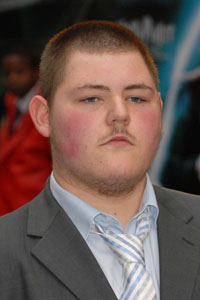 Baby-faced Harry Potter bully Jamie Waylett was arrested on Sept. 20 in London for creating a bomb he intended to use during the London riots.

UK authorities claim the 22-year-old actor — who appeared as Crabbe in six films of the hit franchise — was packing a Molotov cocktail when he raided a London champagne store on Aug. 8. Footage from the store helped police identify — and detain — the actor.

Waylett also had 15 marijuana plants in his home, according to the Daily Telegraph.

“[Waylett] was charged with violent disorder, having an article with intent to destroy or damage property, receiving stolen goods and also cultivating cannabis plants,” the police said in a statement.

Drugs and bombs were the last thing on Waylett’s mind back when he first appeared in Harry Potter and the Sorcerer’s Stone.

“I have enjoyed acting in all four films! It’s a really hard question to answer, but if I had to pick one, it would be Chamber of Secrets,” the young actor said in 2005 of his favorite Potter film. “Maybe this is because I had a bigger part to play, with the ‘Polyjuice scene’ and I felt more involved in the film.”

He also gained a reputation as the only actor who was a fan of the series before he was cast in the film. However, he also had a bit of a dark side.

“I want to keep acting, after Harry Potter,” he said in a 2004 interview. “I want to play a villain. A proper one. Because when you’re evil, you get a really dramatic ending, like you die or something. I’d want to get shot up by a machine gun.”

He was later released on bail and is due back in jail on Nov. 11.