Khloe Kardashian says watching her brother Rob Kardashian on Dancing with the Stars makes her “want to vomit.” 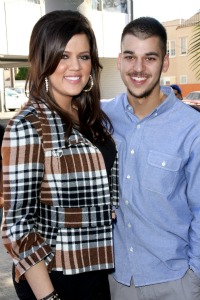 There’s at least one Kardashian who won’t be stepping onto the floor on Dancing with the Stars. Khloe Kardashian says just watching her brother Rob Kardashian compete makes her nauseated and her nerves could never handle competing herself.

“Mondays and Tuesdays, I want to vomit,” Khloe told E! News on Wednesday. “I love watching him [Rob] but…you get sick the whole day and that’s not fun because you’re nervous. So I could never do that show because if I can’t watch him, I don’t think I could do it!”

“I went to a ton of his rehearsals and I was like…’You gotta smile! Smile!'” she said. “I would videotape him so he could see it. I definitely was a little crazy but he’s doing so amazing and I’m just proud of him.”

It’s probably better that Khloe doesn’t take on any other big commitments right now, since she and Kourtney Kardashian just adopted a new family member. No, it’s not the baby Khloe is said to be longing for — it’s a snake!

While we’re more used to seeing the Kardshian sisters wearing snakeskin than caring for one of the creatures, Khloe and her sis were spotted at a New York pet store purchasing the wiggler.

Khloe plans to take a more hands-off role in the snake’s care, though. “EW! [It’s] not mine,” she told an onlooker, adding that Kourtney would be doing all the snake charming in the family.