Blame it on the rain! X Factor was rescheduled after a rain delay caused a baseball game to be aired later, creating a real scheduling snafu for Fox. 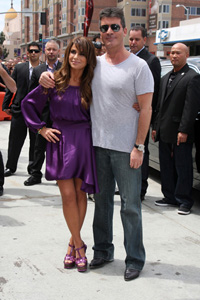 Simon Cowell was undoubtedly upset when his new reality show X Factor got bumped due to a rain delay from a baseball game. Fans who tuned in last night to watch the X Factor judges visit the final 32 contestants at their homes and to see special guest Rihanna were disappointed to instead see the Detroit Tigers and Texas Rangers baseball game instead.

The baseball game was supposed to start at 4:19 pm, but the unrelenting rain didn’t let up until much later, delaying the game by 2 hours and 13 minutes, pushing X Factor back to 8 pm. The game then went into extra innings, causing Fox to announce during the fifth inning that X Factor would not air that night.

“Call me a dork but I plan my Wed night for @TheXFactorUSA. Now because of some wack baseball game I’m supposed to miss #DateNightWithSimon,” one upset fan tweeted.

Fox decided to air last night’s X Factor episode during their regular slot tonight, and will air tonight’s show this Sunday. The scheduling changes could be making X Factor execs nervous, as the show got off to a “quiet start” by averaging an 8.7 rating, which is half of what American Idol received during its season 10 premiere.

Rihanna should bring in the ratings — and she actually revealed that if she hadn’t already made it in the business that she would have entered the X Factor competition! “Six years ago, before I was signed, if it was the X Factor that had come first, I definitely would have entered to have a chance at fulfilling my dream. With this show, it’s all so exciting and it’s like a party!” she said.

This week’s X Factor will whittle down the 32 contestants to the 16 semifinalists who will compete on live shows.