The first trailer for McG’s action-comedy, This Means War, has debuted online. The movie pits Chris Pine against Tom Hardy in a battle of affections for the lovely Reese Witherspoon.

Reese Witherspoon is one lucky girl. The Oscar-winning actress’ latest film, This Means War, features her at the center of a love triangle. Her men of choice are British import Tom Hardy and Star Trek’s Chris Pine. How can she choose between those sexy guys? 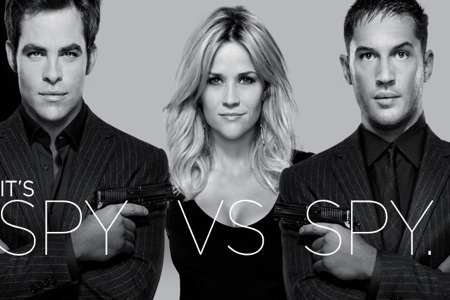 This Means War centers on super-spy best friends (Hardy and Pine), who happen to be dating the same woman (Witherspoon). Initially, they have no idea that they’re in competition for her affection until a picture email reveals all. Instead of confronting their lady love about her infidelities, the duo decides to leave her in the dark. Fueled by jealousy, a spy-vs-spy war breaks out with Witherspoon being the ultimate prize.

Over at USA Today, director McG discussed the professional and personal dynamic between the male characters. Hardy is described as the James Bond-type, while Pine is more of an “American bruiser.” “They get to run around to exotic places, and everything is great until they meet a chick,” reveals the director.

When offering the female lead to Witherspoon, McG told her, “You’re America’s sweetheart. Women love you. Men … like you. I want men to covet you.” The director loves strong women (he directed both Charlie’s Angels films) and he wanted Witherspoon to come across as sexy and self-sufficient.

Check out the first trailer for This Means War below.