Chris Tucker is facing some pretty huge financial problems these days, thanks to his Florida mansion.

Related story 2013 BET Awards: BET got it right with Chris Tucker as host 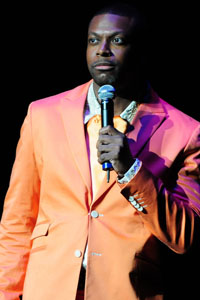 Rush Hour actor Chris Tucker is in some pretty serious financial troubles these days — he’s about to lose his Florida home to foreclosure, according to court documents.

The actor, 39, bought a 10,000-square-foot waterfront home on central Florida’s Lake Apopka in 2007. Tucker purchased the home — located in the swank Bella Collina community — for $6 million, but still owes about $4.4 million on it, according to the Orlando Sentinel.

“Tucker’s was among eight luxury homes displayed during a ‘Street of Dreams’ event at the height of the real-estate boom in 2006, when unimproved one-acre parcels in the budding enclave of the super rich sold for hundreds of thousands of dollars. Some lots sold for more than $1 million,” Sentinel reporter Stephen Hudak wrote.

The palatial home includes five bedrooms, a personal spa in the master suite, outdoor kitchen and “an unusual basement designed like a pirate ship with a wooden deck, mast and sail.”

Celebrities that don’t pay their taxes>>

Tucker has worked pretty consistently over the years, so why is the home in foreclosure? It looks like it’s an age-old case of money mismanagement. Court documents show that the IRS took out a $11.5 million tax lien on the home earlier this year for unpaid income tax. In addition, Tucker’s mortgage payment was $25,812.50 a month — a huge amount, even by Hollywood standards.

We’ve reached out to Tucker’s rep for his side of the story. He’s staying quiet for the most part — he just canceled a stand-up appearance in Albany, New York, scheduled for this weekend due to “unforeseen circumstances.”

Let’s hope he can get this figured out so he’s not soon living like Sly Stone.