Victoria Jackson is not a fan of the Occupy Wall Street movement — and she let them know it! 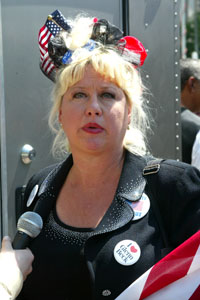 Many celebrities, including Susan Sarandon, Tim Robbins and Kanye West are showing their support for the Occupy Wall Street movement taking place in New York City and around the country.

Not every celebrity is into it, though: former Saturday Night Live star Victoria Jackson – now a staunch conservative – took her opinions and video camera down to the protests in Manhattan’s Zuccotti Park to do a little protesting of her own.

Jackson recorded herself asking protestors what they’re rebelling against – and then refuting their answers with her own views. She repeatedly referred to President Obama as a Marxist and Socialist.

“Right now, 50% of people pay taxes and 50% do not. So if everyone gets free stuff who is going to pay for it?” Jackson asked a protestor. The man responded that the U.S. “should end the wars and tax the super rich” to shore up the country’s staggering debt problems.

“Class warfare is Marxist,” she replied. “So you don’t think Obama is stirring up racial and class warfare and it’s straight out of Rules for Radicals written by Saul Alinsky?”

“Jesus said a man should work for his living, not get a hand-out,” she said in the video.

This isn’t the first time Jackson has used religion to support her stances on things like gay marriage. The comedian told CNN Headline News earlier this year that shows like Glee shouldn’t be promoting gay relationships on the show.

“They should have a celibacy campaign and tell kids that 50% of teenagers now have this new STD from oral sex, that’s what they should try to be doing instead of making kids gay,” Jackson said.

“I just want to know why the liberals are pro-Muslim and pro-gays. Muslims kill gays. That’s what’s confusing to me. And the only thing I can come up with is the Muslims hate God and the gays hate His word.”

Which side are you on: Victoria Jackson or Occupy Wall Street?