Lenny Kravitz tackles race and body image issues in his new album Black and White America, revealing that as a small child he didn’t even realize race was an issue. 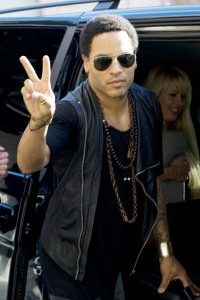 Lenny Kravitz is opening up about what it was like growing up with a black mother and a white father. In an interview with The Associated Press the singer talks race, the full-figured women he marveled at while recording Black and White America in the Bahamas, and President Obama.

“I grew up in a house full of every color. I didn’t know anything about problems until I went to first grade and it was brought to my attention. I knew my father looked different than my mother, but I didn’t know that that meant anything. … I had no idea that it was an issue.”

“They would walk down the street (and) people would spit on them. My father would take my mother to a hotel on holiday and they would say, ‘No prostitutes allowed at the hotel’ — very disgusting things. My father lost his side of the family ’til I was born. It took them a minute to get it together. But in essence … none of that bothered them. They were in love and they wanted to be together and that was that.”

On the title track, “Black and White America”:

“It’s a very special song to me and it’s obviously got a lot to do with who I am. It’s my story. It’s everything I knew growing up. It’s my parents’ story — being an interracial couple growing up in the time of the civil rights movement. And it’s the story of today — what we’re going through, dealing with race and the fact that we have an African-American president.”

“It’s a tough gig. I think he’s done a lot of great things and I think that some things are challenging and difficult for him. But I don’t know how it works. I know how I think it works, but we don’t know how it really works. And so, you know, when I’m talking about him and I’m identifying with all this, it has a lot to do with sort of the social aspect of the whole thing, not just political.”

“You have all these full-figured, Bahamian women coming into the club dancing very provocatively and they’re dressed very, very sexy, and their shorts are super short, their tops are very revealing and they’re wearing all these bright colors. And what I took from that, what I really liked, was the fact that they’re not bothered by the stereotype of what society, what media says is beautiful. They know they’re beautiful and they are beautiful, and they are not worried about fitting into that image, and I thought that was really beautiful to see because people here are killing themselves to look a certain way and aren’t proud of how they were created.”

Read here for more on Black and White America and Lenny Kravitz!