Disney previously halted production on The Lone Ranger over budget concerns, but compromises have been made — shooting will begin in February! 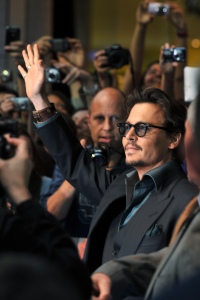 Johnny Depp has an official start date for his role as Tonto in The Lone Ranger! On February 6th the film, plagued with budget issues, is reportedly all set to get on with the giddy-up.

According to Deadline director Gore Verbinski, Johnny Depp and producer Jerry Bruckheimer have come to a budget agreement allowing filming of The Lone Ranger to proceed. Financiers for the project started to shake in their boots when the entire budget was estimated to be a staggering $250-275 million — a huge gamble in the fickle genre of Western films.

“Johnny Depp, Jerry Bruckheimer and Gore Verbinski are such a talented combination and we’re thrilled to get back to work with them on The Lone Ranger,” a Disney spokesperson said.

The Social Network‘s Armie Hammer — who will play the masked man everyone keeps inquiring about — was originally slated to ride Silver this fall, with the release date in December. As shooting on The Lone Ranger will not begin now until February of 2012,  the movie’s release has been re-scheduled for May 31, 2013.

Rumor has it Johnny Depp put his foot down, insisting that Gore Verbinski be the one to direct The Lone Ranger. Verbinski, who worked with Depp on Rango and the Pirates of the Caribbean franchise, reportedly demanded the budget not be brought down to the studio’s level of $200 million. Deadline wrote that Verbinski ”won’t take the budget down to a certain point where it’s not the same movie that he started out to make.”

Of the new budget compromise, Entertainment Weekly reports, “The script, which adds heavy supernatural elements to the Western, was tweaked to reduce visual effects costs, and the stars are said to have accepted upfront salary concessions (likely to be repaid on the back end if the movie is a hit).”

Are you planning to see Johnny Depp ride in The Lone Ranger?