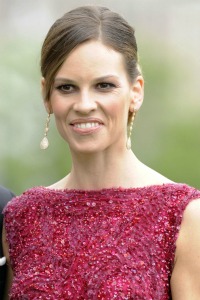 It was revealed that Swank attended the Chechnyan leader’s birthday party when the Human Rights Watch organization criticized her actions.

“I deeply regret attending this event, which has thrown into question my long and deeply-held commitment to the protection of human rights,” Swank said in a statement released to the Associated Press this morning.

“I would never intentionally do anything that raised doubts about such commitment. I will continue to donate my time and my financial resources not only to the charities with which I am currently affiliated, but also those dedicated to the preservation of human rights. If I had a full understanding of what this event was apparently intended to be, I would never have gone.”

Swank claims she thought she was attending a political celebration of the rebuilding of the war-torn area — but it was actually the leader’s birthday party.

Kadyrov has been accused of unspeakable war crimes including the torture, abduction and execution of his enemies.

Human Rights Watch says they wrote to Swank months before the event telling her about Kadyrov’s alleged crimes and urging her not to attend. They claim her people assured the group she would not go, but she showed up anyway.