Elimated Dancing with the Stars contestant Chynna Phillips made a shocking revelation on the heels of her leaving the contest for good. She calls the reality dance series, “a popularity contest.” 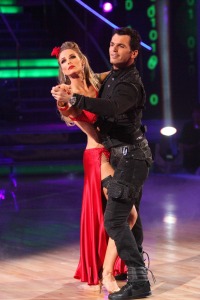 It was the elimination that shocked Dancing with the Stars fans. Chynna Phillips and partner Tony Dovolani will dance no more on the reality show, after a performance that was low on routine and high on drama.

After blanking out on the routine she and Tony had so carefully prepared during the week, a visibly shaken Chynna took heat from the judges. On Tuesday evening’s show, they were eliminated in a shocking turn of events.

Miss the results show? Read about it here>>

The internet was buzzing, as Phillips was a competent dancer and seemed to have the ability to make it through to the end of the series. But when Phillips was asked about her elimination, she had some not-so-kind words for the entire process of voting.

She told The Huffington Post, “It really does come down to the votes. And that’s kind of sad because it’s supposed to be a dance competiton, but it’s actually a popularity contest, which makes me kind of sad.”

Phillips then stated, “You know, you have to have a little bit of faith that there are people out there who are truly voting for their favorite dance, not their favorite person, because it is a dance competition and people are working really hard. It would be very sad if that was undermined, and it looks to me like that keeps getting undermined.”

While it is the unspoken secret of the interactive reality television show, it does indeed come down to whom the fans like the most.

Said Phillips’ partner Dovolani, “I’ve been on the show for twelve seasons, and Chynna has been a breath of fresh air for me. As much pull as we have as teachers, it really is all about the celebrity.”