Alec Baldwin is making the leap from TV to radio with his own podcast. The 30 Rock star has joined forces with WNYC radio to host an interview series called Here’s the Thing. 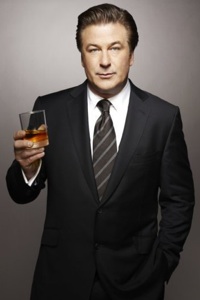 Alec Baldwin is one of Hollywood’s most versatile actors. He’s a TV, movie, Broadway and now podcast star. With his stint as Jack Donaghy on NBC’s 30 Rock coming to an end, Baldwin is actively looking to pursue other projects.

According to the Associated Press, Baldwin has lined up a new gig as podcast host for WNYC radio’s Here’s The Thing. The actor’s first show will debut Oct. 24, and will feature Oscar-winner Michael Douglas who’ll discuss everything from his long-running career to his recent bout with cancer. Other guests will include Republican campaign strategist Ed Rollins, reality-show celebrity Kris Kardashian Jenner, comic Chris Rock, actress Kathleen Turner, author Erica Jong and veteran talk-show host Dick Cavett.

Baldwin considers himself a “public radio junkie,” and he’s parlaying that love into a potential career. After briefly filling in for WNYC host Kurt Andersen, both he and the station were interested in doing more work together. Baldwin’s had more than his fair share of experience hosting live programming. He has co-hosted the Oscars, he’s hosted Saturday Night Live a record 16 times and he’s a Broadway vet who’s stepped into Marlon Brando’s shoes in the play A Streetcar Named Desire.

As for his 30 Rock future, Baldwin’s contract ends at the end of the upcoming sixth season. The show has the option to extend it for another year, but Baldwin isn’t sure if he wants to overstay his welcome.

“I might,” he said. “I wouldn’t want to prevent them from having another year, because they’re all my friends and they’ve been good to me. Maybe I would do a piece of the year. But I really do want to move on to other things.”