Just yesterday, Ashton Kutcher took to his Twitter account yet again, and left everyone scratching their heads. He tweeted a message and left a link to a photo of two cufflinks that said control and escape. 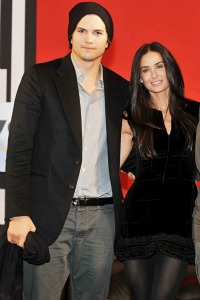 After leaving wife Demi Moore a friendly tweet on October 10, Ashton Kutcher has gone back to leaving cryptic messages on his Twitter account, only adding more fuel to the fire that his marriage is in trouble.

Just a few days ago, Kutcher left a note for wife Moore on her Twitter account that read, “Big night for TV #twoandahalfmen Bears vs Lions and@mrskutcher’s 5. My tivo might explode.” He then followed that with, “good luck tonight! you should be proud.”

Although Moore was on her twitter account and answering questions during that time, she did not respond to her husband’s message.

But then, on October 12, Kutcher tweeted a link to a set of cufflinks that said control and escape on them, accompanied by a tweet that read, “If we are not looking for one we are looking for the other Ctrl Esc.”

Kutcher also tweeted to a photo of a woman with a hand over her mouth. On the hand was a drawing of a wide open mouth. The tweet read, “Fancy, ahhhhhhh.”

These tweets come hot on the heels of a revelation by the woman Kutcher reportedly had an affair with, Sara Leal.

Leal claimed that she and Kutcher had sex in a hot tub for two hours on his wedding anniversary.

Leal revealed to the Sun newspaper, “We had sex twice. Everything felt natural. We were having a good time. One thing led to another. he was good, but it wasn’t weird or perverted or creepy. I was attracted to him and he was attracted to me.”

A united Moore and Kutcher recently went camping together under the watchful eye of their Kabbalah teacher.