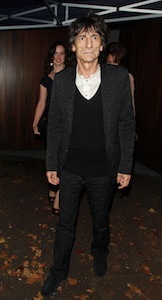 Ronnie Wood, the guitarist for The Rolling Stones, is now single according to the UK’s Daily Mail. The 64-year-old rock legend split from his 29-year-old Brazilian model girlfriend, Ana Araujo. The pair dated for two years before Wood decided to leave the relationship — which comes just a month after a report that they were engaged. The press speculated Ronnie was single when Ana did not accompany him to Sir Paul McCartney’s wedding this past weekend.

Seemingly in good spirits about the break-up, Woods commented that he’s “taking a sabbatical [from Araujo]” and is “like Picasso, painting up the ladder after leaving his mistress at the bottom after a row.” (For us on the other side of the Atlantic, “row” is a British word for an argument.)

The cause for the split? A source close to Wood revealed to the Daily Mail that it stemmed from Araujo’s need for fame, “She would try and drag him along to the opening of an envelope.” Woods has neither confirmed or denied whether Araujo’s quest for the spotlight was an issue.

In the past, Ronnie credited Araujo with helping him maintain his sobriety from alcohol and drugs. The Rolling Stones band member had struggled to remain clean over the decades and has had multiple run-ins with the law — most recently in 2009 when the police were called in response to a domestic dispute between him and Ivanova.

There’s no word yet from Araujo’s camp about the break-up. We wish both her and Wood the best in their future endeavors.