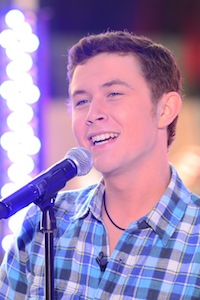 2011’s American Idol winner Scotty McCreery made history on Wednesday when his debut album Clear As Day went straight to the number one spot on the Billboard Hot 200 chart. This lands McCreery in the history books for a few reasons.

First of all, he’s the youngest artist to ever debut an album at number one — at just 18-years-old. Billboard reports that the record was previously held by the artist Omarion who debuted his album “O” at age 20 back in 2005. McCreery just turned 18 on October 9, which means he was just shy of setting the record at age 17. But, happy belated birthday anyway, Scotty.

Scotty McCreery’s album also marks the first country studio album to open at number one on the Billboard Hot 200 Chart. And in case debuting at number one wasn’t enough for McCeery, his album also sold 197,000 copies in its first week — making it the best week ever for any country act this year.

For those of you wondering what exactly the Billboard 200 chart is: it ranks the best-selling albums based on retail and digital sales. The chart is not genre-specific, which makes McCreery’s country debut at number one even more impressive.

Scott McCreery is set to take his place among fellow American Idol greats as well. The success of Love You This Big marks the third biggest opening in terms of sales since 2008’s American Idol winner David Cook. But, his number one debut makes him only the third Idol to accomplish such a feat — behind only Kelly Clarkson (2001) and Ruben Studdard (2003).