Everyone is jockeying to impress the legendary Catherine Avery (Debbie Allen) on Grey’s Anatomy: “Love, Loss and Legacy,” especially after they learn Jackson’s mom is in town to perform a penile transplant. With that jaw dropper on the board, Ben (Jason George) makes his move on Bailey and a familiar patient checks into pediatrics — hopefully not little Zola!

Catherine Avery is bringing her genius — and one wild transplant case — to Seattle Grace on tonight’s Grey’s Anatomy and the surgical diva is sure to shake things up for the locals. 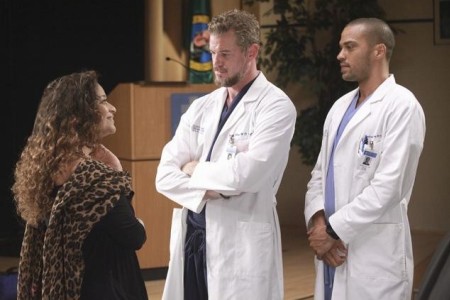 It’s no surprise that our fave residents want in on that penile surgery, not to mention some surgical time with the great Dr. Avery, so everyone’s going to play their best cards. Plastics king Sloan has no trouble charming his way onto Avery’s team — once she hears he’s Jackson’s mentor, that is. Sloan may be convinced it’s better to build a new penis than fail at a transplant attempt, but he has good dish on her son!

Check out the competition: Get the Sheknows’ Secret Circle preview >>>

The dazzling, brilliant doc Avery dotes on Jackson, but he has similar mommy-issues as Meredith, which doesn’t bode well. Plus, Avery’s itching for dirt on Lexie: How will it go when she learns that Sloan dated her before Jackson?

While everyone’s buzzing over the senior Avery, Arizona and Alex face a confidentiality crisis in the peds department. Someone familiar comes in and they want to tell. It’s all a bit forboding, considering Derek and Meredith are still waiting for word on their adoption and little Zola, but perhaps it’s just a blast from the past.

Love is in the air

With all this drama unfolding, Teddy is floating on a honeymoon haze. She’s so happy to be in love she even plans a couples’ dinner party, and everyone knows that’s a bad idea with the volatile Seattle Grace crew.

Case in point, Bailey and Eli are on the guest list… but the returned Dr. Ben is through laying low. He tells Bailey he knows that after he gave her the space she needed, she started canoodling with a male nurse. That nurse is, of course, her date to Teddy’s party.

As you can see from the video clip above, just talking to Ben gets Bailey flustered, but by the end of the night, she’ll make her decision about the men in her life.