Actor Richard Gere had quite a collection of vintage guitars and amplifiers that he auctioned off for around $1 million. 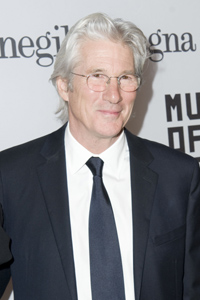 Richard Gere never planned on having an extensive guitar collection, saying he was just a fan of guitars and bought those that sounded good to him — not ones that he thought would turn a profit.

“He wasn’t outsourcing the purest examples of guitar making — ones that were unused the way a coin or a stamp collector would collect,” said musical instrument specialist Kenny Keane. “He was looking for instruments that did something personally, tonally for him.”

The Pretty Woman actor had good taste in the instruments that he collected over the past 40 years — and when his collection of 106 guitars went up for auction at Christie’s on Tuesday, the collection took in around $1 million — $936,438, to be exact.

His Gibson 1960 Les Paul solid-body electric guitar was bought for $98,500 by a private U.S. collector, which was more than the pre-sale estimate of $98,000. The CF Martin & Co Museum in Nazareth, Pennsylvania purchased three of his guitars, including a 1931 CF Martin guitar and case that went for $62,500.

His 1960 Gibson Inc. electric guitar also did well at the auction, as an anonymous buyer bought it for $47,500.

Gere, who studied the trumpet and is reportedly a self-taught guitarist and pianist, decided to sell his guitars to donate the money to support global humanitarian causes.