What is Salma Hayek’s secret to youthful and glowing skin at age 45? She says it’s not Botox, but beauty creams! 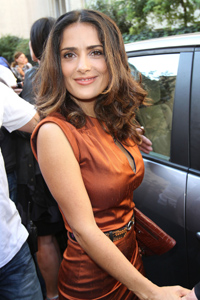 Salma Hayek is 45 — but looks a full decade younger thanks to good genes and beauty creams. The Puss in Boots actress denies that she has ever had Botox.

“I have no Botox. The thought of a needle coming to my forehead, it really gives me the heebie-jeebies. So I’d rather put on my creams,” she tells Latina magazine. “It’s fun, it smells good, and it’s relaxing.”

The actress looks amazing in a navy and gold strapless dress on the cover of the magazine, however says she may consider Botox down the road. “Am I opposed to doing it later? I don’t know. I want to see how far I can go,” she said.

Of course, taking care of her skin is something Hayek says she does every day. “It’s also important to take care of your skin because if you’re not careful, one day you’ll wake up and a spider will have taken over your face and you’ll be full of lines,” Hayek said.

Hayek has launched her own skin care and hair care line called Nuance at CVS stores. “At the time I wanted to do the beauty line I didn’t know how, but I never stopped trying to learn,” she says. “It’s not that I said, ‘I’ve gotta do this no matter what.’ It was like, I know how to act. I don’t know how to do this other thing, but I think I could. So I studied, I paid attention, I asked a lot of questions, I investigated each product. And then, in time, it came.”