The Secret Circle tests Cassie’s loyalty towards family and friends this week, as the Circle faces another dark entity that slithers to their door.

What will slither its way to the Circle this week? We’re not quite sure, but we know it’s dark. 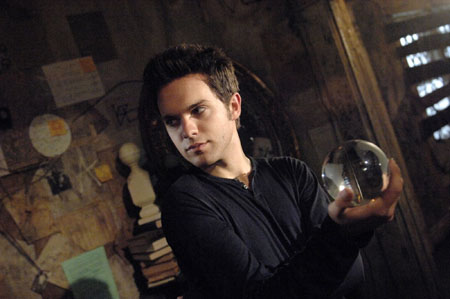 Last week, a crazy comatose woman named Heather from Cassie’s mom’s past launched herself at the witches ofThe Secret Circle — this week it gets even darker.

On this week’s new episode “Slither,” loyalties are tested as a dark danger forces the Circle to come together — despite Diana’s best efforts to find alone time with Adam.

Check out this preview…

The CW officially describes “Slither” as the following: “Torn between her loyalties to the Circle and her family, Cassie (Britt Robertson) wrestles with the secrets she must keep from her grandmother (Ashley Crow). Nick (Louis Hunter) is thrown for a loop when Melissa (Jessica Parker Kennedy) adopts a new attitude and enlists his help to track down her family’s Book of Shadows. Faye (Phoebe Tonkin) is also recruited but isn’t happy about being the third wheel. Meanwhile, Diana (Shelley Hennig) is craving some alone time with Adam (Thomas Dekker) and arranges a date night so they can rekindle the spark in their relationship, but all six of them are brought together to fight off a dark force that threatens to destroy the Circle from within. Completely unaware of the new danger encroaching on their children, Dawn (Natasha Henstridge) joins Charles (Gale Harold) aboard his boat to further their plans for the Circle, but is surprised to find that Charles may have more than business on his mind.”

Have you been following the witches of The Secret Circle? Who is your favorite? Do you like the level-headed Diana or the unpredictable Faye? How about Cassie?